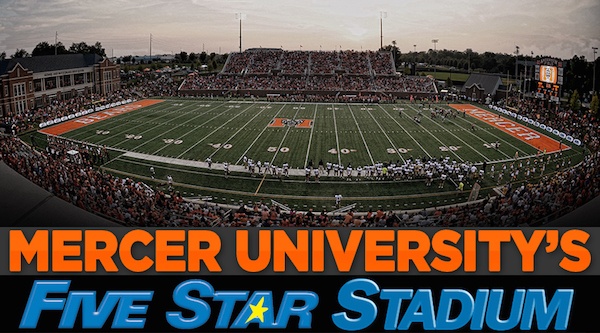 MACON – Mercer University’s two-year-old, 10,000-seat stadium, home of Mercer Bears football and lacrosse, has been renamed Five Star Stadium in recognition of a multi-million dollar commitment, the largest-ever for Mercer athletics and one of the largest in the University’s history. The financial commitment comes from Five Star Automotive Group, owned by Charlie Cantrell and Dick Pope.

“Charlie Cantrell and Dick Pope are two of the University’s strongest supporters, and we are deeply grateful for this significant financial commitment,” said Mercer President William D. Underwood “We are proud to have the Five Star name on one of the finest athletic venues of its size in the nation.”

Mercer Stadium opened in 2013 when the Mercer Bears resumed competition in intercollegiate football after a 72-year hiatus. Mercer’s men’s and women’s lacrosse teams also play their home games in the stadium, which has hosted a number of state high school playoff games, all-star games, band competitions and other events over the last two and a half years. In its first season in the Southern Conference this past fall, Mercer football averaged more than 10,000 fans at its seven home games. The stadium is part of the Tony and Nancy Moye Complex, which also includes Drake Field House, Anderson Field and the Butler Family Plaza.

“We are pleased to further align Five Star Automotive with Mercer athletics and with the University as a whole,” Cantrell said. “The quality of Mercer’s athletics facilities, the high level at which Mercer teams compete, the outstanding performance of student-athletes in the classroom, and the strong connection Mercer has built with the Middle Georgia community make this a good partnership for our company.”

“Mercer University contributes so much to the quality of life in Middle Georgia, and athletics is a big part of that,” Pope said. “Five Star Automotive Group is proud to have its name associated with such a fine institution and an athletics program whose national visibility continues to grow.”

“Five Star Automotive Group and its owners, Dick Pope and Charlie Cantrell, understand the commitment it takes to compete and be successful on a daily basis,” said Mercer Athletics Director Jim Cole. “We are honored to have the Five Star name and what it stands for proudly displayed on Mercer University’s football and lacrosse stadium.”