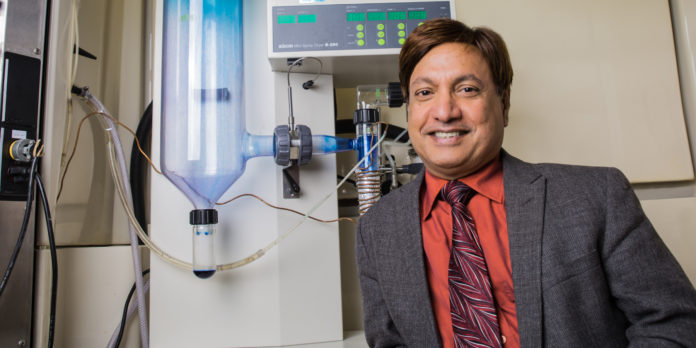 College of Pharmacy Professor Martin D’Souza and researchers at Emory University were awarded a National Institutes of Health grant to study whether oxytocin-encapsulated nanoparticles targeted to the brain, will help lessen seizures and behavioral deficits in childhood epilepsy.

Most anti-epileptic drugs do not adequately treat severe seizures and behavior deficits and come with a host of side effects. More effective, longer lasting treatments are needed. Previous research has shown neuropeptides can control seizures and improve behavioral abnormalities but that they do not easily cross the blood brain barrier.

This R01 grant of $2.4 million will provide Dr. D’Souza $284,000 over five years to provide Emory with nanoparticle-encapsulated oxytocin, which has been shown to penetrate the blood brain barrier and to confer sustained resistance to seizures in mouse models.

Dr. D’Souza is a nationally known expert in nanotechnology whose laboratory focuses on the design of novel patented technologies to deliver nano vaccines via oral-, buccal-, parenteral- and microneedle-based transdermal routes. He has developed two potential dry particulate vaccines, one for gonorrhea and another for ovarian cancer, which will be the first ovarian cancer vaccine to reach clinical trials.

This new study will look at whether nanoparticle encapsulated oxytocin can address seizures and behavioral deficits in mouse models of several childhood epilepsy caused by mutations in two sodium channels.

“Our long-term goals are to better understand the mechanisms by which neuropeptides regulate neuronal excitability and to develop safe and effective approaches for the brain delivery of neuropeptides for the treatment of epilepsy,” Dr. D’Souza said.