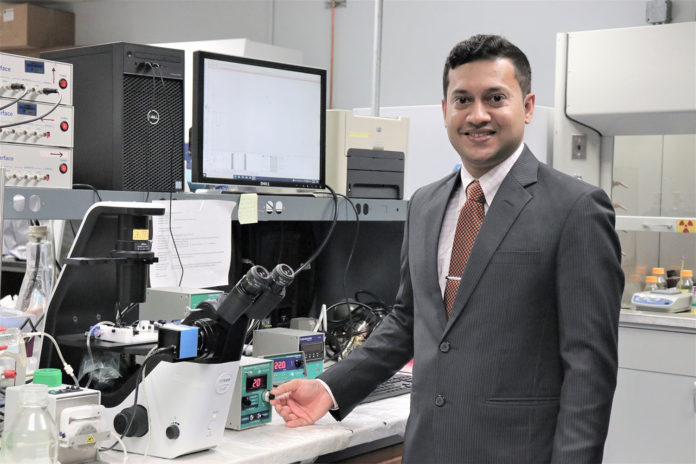 Mercer University College of Pharmacy’s Raquibul Hasan, Ph.D., has received funding from the National Heart, Lung and Blood Institute to study two novel targets in blood vessels that may lead to improved understanding of how statins work in the body.

The grant of $424,500, over three years, will allow Dr. Hasan and his research team to look more closely at two novel targets of statins they have identified in blood vessels that mediate both rapid constriction and dilation within minutes.

Statins are commonly prescribed to reduce cholesterol, and this cholesterol-lowering action is believed also to dilate, or open, blood vessels, which helps reduce blood pressure. Dr. Hasan and his team have found that in male animal models, statins act on a distinct molecular target to rapidly open gut vessels, which may lower blood pressure. They also found statins act on a second molecular target to constrict brain vessels and the aorta.

The findings challenge the commonly held belief that the beneficial effect in blood vessels requires cholesterol reduction, usually achieved by statin therapy for months to years. The two molecular targets are different from statins’ typical cholesterol-reducing targets and produce opposite effects depending on vessel type and location.

In female animal models, though, statins were observed to cause less constriction in brain vessels and greater dilation in the gut vessels.

“Such gender-biased statin actions may support the premise that premenopausal women are better protected against cardiovascular diseases due to better vascular function,” Dr. Hasan said. “We can block the second molecular target and its constrictive effect using calcium channel blockers that are already on the market for treating high blood pressure. But clinicians should prescribe statins more cautiously in male patients due to potential adverse cardiovascular outcomes.”

The first molecular target, which opens gut vessels, also is abundant in penile vessels. This study will look at the first target for its ability to reduce blood pressure and to possibly reverse erectile dysfunction.

Previous studies on statins used much higher drug concentrations than what typically reaches our blood after consumption, and thus, researchers may have overlooked the targets’ vascular actions, Dr. Hasan said. This new study, he hopes, will result in the promotion of safer and more personalized statin therapy.