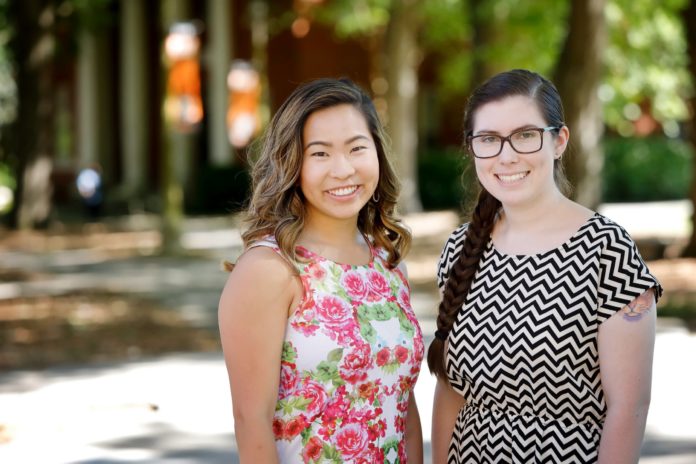 Duffey, from Fort Walton Beach, Florida, is double-majoring in English and mathematics with minors in history and Spanish. She will serve as a Fulbright English Teaching Assistant (ETA) in South Korea from July 2019-July 2020.

She has participated in a Mercer On Mission trip to South Korea, conducted research for the Mercer Writing Program with a grant from the Research That Reaches Out Office and served as a writing preceptor.

Additionally, she has participated in the University Honors Program, worked as a writing tutor at the Academic Resource Center, served as a copy editor for The Dulcimer literary magazine and held leadership positions in Mercer’s knitting club Unhooked and Sigma Tau Delta, the English honor society.

“My Mercer On Mission experience in South Korea changed the way in which I view the world and the ways in which I can use my education to help others, so earning the opportunity to return to South Korea as a Fulbright ETA is a dream come true,” said Duffey. “As a Fulbright ETA, I plan to improve my knowledge of the Korean language and culture, while bettering my abilities as an English language teacher and experiencing a different education system firsthand.”

Upon returning from South Korea, Duffey plans to pursue her Ph.D. in English.

Hall, from Columbus, is majoring in early childhood/special education – holistic child. She will serve as a Fulbright ETA in the Czech Republic from August 2019-June 2020.

She has participated in the Stamps Scholars Program and the Service Scholars track of the University Honors Program, where she is currently finishing her senior service project, called “Books at Birth,” that provides books to low-income families staying at Macon’s Ronald McDonald House who have children being treated at the Beverly Knight Olson Children’s Hospital.

She has also been active in the Psi Gamma Chapter of Chi Omega, the University’s student admissions team and Mercer Educators in Action.

Hall studied developmental psychology for six months at the University of Nottingham in England. During that time, she was able to visit several countries in central and western Europe. Later, she completed an eight-week internship at a primary school in Cape Town, South Africa, and spent six weeks in Prague, Czech Republic, earning her Teaching English to Speakers of Other Languages (TESOL) certification.

“When I came to Mercer four years ago, I had no clue where I was going to go after graduation or what I even wanted to do. When I expressed interest in international travel, education and service, a mentor professor suggested I should apply for a Fulbright ETA. As I learned more about it and learned more about myself and my desires over the next four years, I knew it was something I wanted to do,” said Hall. “When I received news that I was selected as a finalist, it was a sense of a passion fulfilled. I hope to learn more about myself while I am abroad but also about the Czech people and cultures.”

“Meghan and Sarah Grace are both exceptional Mercerians,” said Dr. David A. Davis, director of fellowships and scholarships. “I have had the pleasure of working with both of them, and they embody the University’s vision to change the world one student at a time.”

Dokken, from Canton, was selected as an alternate to Malta. She graduated in 2018 with a triple-major in sociology, women’s and gender studies, and religion. She has spent the past year working with the Teach Thailand Corps as a kindergarten teacher in Mae Moh and will continue teaching in Chiang Mai for another year. Upon returning to the U.S., she plans to pursue a graduate degree in international community development.

Barger, from Alpharetta, was selected as a semifinalist to Vietnam. He is majoring in biology with minors in chemistry and anthropology. Following graduation, he will attend the University of Colorado Boulder to pursue a Ph.D. in biological anthropology.

Qureshi, from Marietta, was selected as a semifinalist to South Africa. She is double-majoring in global health studies and global development studies with a minor in environmental studies. Following graduation, she will serve the Peace Corps as a life skills educator in Botswana.

Fulbright alumni have achieved distinction in many fields, including 59 Nobel Prize winners, 86 Pulitzer Prize winners, 72 MacArthur Fellows, 37 heads of state or government and thousands of leaders across the private, public and non-profit sectors.